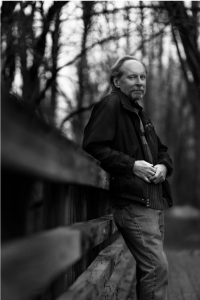 Fred Burton grew up in Queens, New York. He wrote fiction in his early 20s and returned to it again after his children reached their teen years. His first novel, The Old Songs, takes place in Queens during the 1950s and early 1960s. Although he grew up after the years covered in this book, he did experience the turbulent effects of this era and heard the stories brought forth from it. One reviewer said the book read like a “gritty Anne Tyler novel.”

His latest novel, Bountiful Calling, is set in central Pennsylvania and was drawn from a variety of influences. While living in Harrisburg, Pa. he was involved in the anti-fracking movement. This was an excellent vantage point from which to see the powerful business and government forces coalescing around the economic potential of fracking but also its effects on individual people and communities.

Burton avoids easy answers, whether in the emotional interactions in The Old Songs or the ideas swirling about in Bountiful Calling. He carefully constructs situations and characters and at a certain point lets them go on their way. He would rather place the reader within a richly textured, complex situation and let him or her decide what is important, what rings with the sound of truth.

Burton spent his career working in the computer information world, both for government and in the private sector. He’s now semi-retired and living in Baltimore, MD.

In his environmentalist novel, Fred Burton makes a moving plea to preserve our nation’s most beautiful landscapes and natural resources. Set in the mountains of Pennsylvania’s Loyalsock State Forest, the novel centers on Joe, a senior staff member of the State Senate. His loyalties are tested when he meets Nicole, a woodland retreat owner in the Loyalsock Forest, whose family business is threatened by the hegemonic gas and oil industry newly focused on fracking. Nicole emerges as a burgeoning environmentalist when the drilling company decides to build a rig on her family’s property – whether they want it or not. Joe must choose between his senator’s economic agenda for his bedraggled constituents and his growing feelings for Nicole and her family, who have come to treat him as one of their own. Triggered to write by his participation in an anti-fracking protest rally in Pennsylvania, Burton masterfully describes the vicious effects of fracking that go well beyond destroying the natural beauty. His contemplative narrative shows readers a perspective too often overlooked. Burton gives voice to the people directly impacted by these drillings, in places where corporations seem to do whatever they want. By the end of the novel, readers will feel a deeper connection to the lands we call home and will hear the call to preserve our forests and landscapes before it’s too late.