Books have always been part of the life of Barbara Basbanes Richter, who’s both a bibliophile and a Francophile, and there was no way she could have grown up without an appreciation for the power of the printed word. After receiving both a BA and an MA in French Literature (Smith College and Tufts University, respectively), she taught French and Latin for the better part of a decade. As the department chair of a world languages program in Fairfax County, Virginia, she led the development of a school-wide world language curriculum and resurrected a dying French and Latin program.

She also has translated works from French to English before, and her translations have appeared in the following books by non-fiction author Nicholas A. Basbanes: On Paper (Knopf 2013), Every Book Its Reader (HarperCollins November 2005), and Patience and Fortitude (HarperCollins October 2001). In 2015, she translated nineteenth century French correspondence for Wedgestone Press, an endeavor funded by the National Endowment for the Humanities dedicated to transcribing and publishing the documents of Robert and Elizabeth Barrett Browning and their circle.

Now, in addition to translations, she interviews authors, illustrators, and other movers and shakers in the book world for Fine Books and Collections Magazine and for Literary Features Syndicate. She has written about spy libraries, book arts programs for children, Alice in Wonderland’s 150th birthday, Shakespeare on Letterpress, even bibliotherapy and how ISIS funds its terror programs by selling antiquarian books. She also wrote an essay about danger in children’s literature for the Spring 2015 issue of The Sewanee Review, and a long article, “Benjamin Franklin and the Pamphlet Wars,” for the digital version of Humanities Magazine, the magazine for the National Endowment for the Arts. Other publications include reviews and profiles for High Country News, Ravishly.com, FACES Magazine, and FSR Magazine. 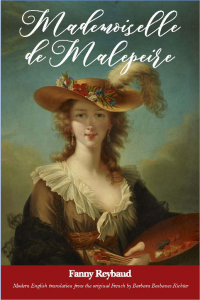 After completing his education, Frederic, a young man living in nineteenth century France, decides to spend a few weeks with his uncle, Dom Gérusac, who’s a scholar of sorts. An unknown but beautiful woman is depicted in a portrait which hangs in his uncle’s home, and Frederic becomes so infatuated with the beautiful image in the portrait that he resolves to determine to know her identity by questioning the people of the nearby town. Frederic finds himself defeated, with nothing to show from his inquiries, until a long-time friend of his uncle, Monsieur de Champaubert, arrives for a visit, recognizes the woman, and subsequently begins to tell how they met.

The Marquis delves into the short time he had been a suitor of the woman, named Mademoiselle de Malepeire. He tells of her disdain towards their prospective marriage, of her inclination to read and study, and of her final rejection by fleeing into the night the day of the wedding announcement. Frederic, after hearing her story, resents all he had felt about Mademoiselle de Malepeire.

The story ends as another friend of Dom Gérusac, the old priest Abbot Lambert, arrives and tells of how a French speaking woman had come to live in the Provençal village which he served, but that he did not know the current whereabouts of this woman. Thirty years after the completion of the portrait and the Marquis’ failure to attain its subject as his wife. Frederic’s curiosity about the woman continues to flourish despite his drastically changed perspective on Mademoiselle de Malepeire, which drives him to successfully uncover the surprising result of her choices.

Mademoiselle de Malepeire evokes opinions on the female gender from the male perspective in a time when traditional aspects of womanhood dictated the upbringing and future expectations of children and adults. This bias still exists today in the multitude of forms expressed in the novel, which is why it is still relevant almost two hundred years later.