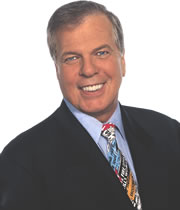 Mike Walker is surely one of today’s most recognized media names, whether you’re talking print, radio, TV, or books. Born in Boston, he was reading Dante at 7 with the encouragement of an uncle who lectured at a local university. Yet, by 16, Walker had left school to join the U.S. Air Force, where, during a four-year stint, he became interested in the world of newspapers and taught. himself how to be a working journalist. On leaving the AF, he remained in the Far East, becoming the youngest ever foreign correspondent for International News Service (which later merged with UP to become UPI), and working as a reporter for Tokyo’s Asahi Shimbun, the world’s largest newspaper. His journalism career in Japan included writing a column on the entertainment world for the Tokyo-based Shipping and Trade News, the Far East equivalent of the Wall Street Journal.

While in the Far East, he also worked as a foreign correspondent for NBC “Monitor,” the award-winning news and news feature radio network show, and as a contributing editor to The Boston Traveler, London Evening News, Hong Kong Tiger Standard, and Bunte (Germany). And he produced an award-winning prime-time network TV special that revealed twelve Japanese heroes and the world’s only intact Mitsubishi bomber on a Pacific island forgotten after World War II. (His journalistic career abroad was certainly enhanced by the fact that, while living and working in the Far East, Walker learned to speak fluent Japanese.)

Returning to the States, Walker joined the National Enquirer. In the 25 years since, he’s developed his two-page “Behind the Screens” gossip column into the newspaper’s most popular and best read feature, and the Enquirer has become the largest circulation paper in America–read by 17 million readers weekly. While continuing his column, he branched out into daily talk radio, taking on the job of hosting the nationally syndicated and highly rated radio program, “Mike Walker’s Gossip Page,” on the Westwood One (CBS) network. The show was broadcast on 165 radio stations. Walker is still heard daily on 24 BBC and independent stations in Great Britain.

In the mid-1990s, with the publication of two New York Times non-fiction bestsellers, Nicole Brown Simpson: The Private Diary of a Life Interrupted, co-authored by Walker with Faye Resnick, and Private Diary of an O.J. Juror, co-authored with Michael Knox, Walker’s name achieved high recognition in the book world.

With successful forays into TV through regular appearances on “Larry King Live,” “Joan Rivers,” “A Current Affair,” “Entertainment Tonight,” “Politically Incorrect,” and “Geraldo” (more times than any other guest), Walker proved Walker to be a gregarious, engaging TV personality. His MGM-TV specials on the entertainment world were big ratings grabbers in 1998.

Since 1996, Howard Stern, who calls Walker “the Hemingway of gossip,” has featured Walker every Friday on his top-rated radio show to conduct the “Mike Walker Game.” For those who’ve not listened in, here’s the way the game works: Sometime during the 7:30 to 8 AM segment, Stern introduces Walker as the gossip editor of the National Enquirer. With the time slot’s guest ensconced in the studio, Walker talks gossip with Stern, co-host Robin Quivers, a show producer, and the guest. Then Stern says, “Alright, let’s play the ‘Mike Walker Game.’” On comes there corded lead-in, which closes with the booming tag, “Enquiring Minds Want to Know,” and a female voice saying, “I want to know.” Walker then provides four gossip items, only one of which is false. The group’s object is to guess which one is the red herring. Often, Walker stumps the panel.

Starting September 13, 1999, Walker will host “National Enquirer,” a highly anticipated half-hour daily TV program. The show will harness the unique resources of the National Enquirer and the talent of America’s most popular gossip columnist, Mike Walker. It will offer a daily roundup of celebrity gossip, entertainment news, and investigative reports as well as feature stories and live interviews with the industry’s most closely followed gossip columnists. The nationally syndicated series, produced by Bogorad/Wyler Productions and distributed by MGM Domestic Television, will be broadcast in more than 95 percent of the country.

In addition to all this, Walker, whom Publishers Weekly has dubbed “The King of Gossip,” has successfully lectured on journalism and gossip at such distinguished journalism schools as theUniversity of California at Berkeley and Columbia University. “I’m an historian,” Walker explains. “I could teach a course in Hollywood gossip as a Professor of Whisperology.”

Walker and his wife of 30 years live in both Palm Beach, Florida, where they raise horses, and in Los Angeles, California. They raised two children, both of whom are grown.