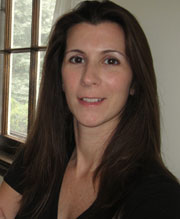 Sara Griffiths is a young adult author and teacher. Her first novel, Thrown A Curve, was published in May 2007. Sara has been teaching language arts to seventh and eighth grade students for many years. She began writing to provide struggling students novels that were age appropriate but easy to read.

Sara currently resides in Whitehouse Station, New Jersey, with her husband, Jamie, and their son, Benjamin.

A Brief Q&A with Sara Griffiths, Author of Singled Out and Thrown a Curve

SG: I grew up with baseball. I had three brothers, and my father was a big Phillies fan. I spent many summers sitting in the bleachers cheering on my brothers. I even have a varsity letter in baseball from my high school, but it was for being the team manager, not a player. I was quite the statistician then.

Q: How did you get the idea for this book?

SG: I liked the idea of a girl in boys’ world story. In Thrown a Curve, I was able to use the baseball team as the boys’ world, but for the sequel, I wanted to go bigger, hence the prep school. I also wanted to bring in a ‘new guy’ for Taylor, someone who would challenge her. The character of Sam Barrett is by far my favorite character in Singled Out. Readers will have to decide whether to trust him or not.

Q: Why the prep school?

SG: I was educated in public schools. My husband, however, went to an all-boys private Catholic school. Hearing him talk about it over the years must have seeped into my brain. Many of his values come from his experiences there and I think that elite prep schools do have a great influence over the type of men boys become. I also mentioned the idea to a group of students during a book talk about Thrown a Curve and they seemed to like the idea of Taylor at an all boys’ school.

Q: Was writing the second book easier than the first?

SG: Writing Singled Out was just different from writing my first book. With Thrown a Curve, I had all the time in the world and never really knew if anyone would ever read it. With Singled Out, I had editors and deadlines, which was actually a great motivator to keep writing. I loved getting the constant input from my editor, Harrison Demchick. I was able to produce a much more sophisticated story. Thank you, Harrison!

Q: Who is the target audience?

SG: I think the target audience for Singled Out is slightly older than for Thrown a Curve. Taylor is now 17 years old, and some of the issues would probably appeal to middle school and high school students. I think girls will connect with Taylor, and boys will enjoy the mystery, bullying, and baseball elements.