Rosemary Kennedy and the Secret Bonds of Four Women 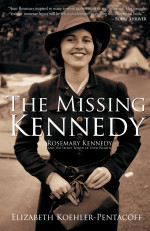 Featured in People Magazine, the Daily Mail UK, and more.

Press Kit for THE MISSING KENNEDY

Rosemary (Rosie) Kennedy was born in 1918, the first daughter of a wealthy Bostonian couple who later would become known as the patriarch and matriarch of America’s most famous and celebrated family.

Elizabeth Koehler was born in 1957, the first and only child of a struggling Wisconsin farm family.
What, besides their religion, did these two very different Catholic women have in common?
One person really: Stella Koehler, a charismatic woman of the cloth who became Sister Paulus Koehler after taking her vows with the Sisters of the Third Order of St. Francis of Assisi.
Sister Paulus was Elizabeth’s Wisconsin aunt. For thirty-five years (indeed much of her adult life) Sister Paulus was Rosie Kennedy’s caregiver.

And a caregiver, tragically, had become necessary after Rosie, a slow learner prone to emotional outbursts, underwent one of America’s first lobotomies, an operation Joseph Kennedy was assured would normalize Rosie’s life. It did not. Rosie’s condition became decidedly worse.

After the procedure, Joe Kennedy sent Rosie to rural Wisconsin and Saint Coletta, a Catholic-run home for the mentally disabled. For the next two decades, she never saw her siblings, her parents, or any other relative, the doctors having issued stern instructions that even the occasional family visit would be emotionally disruptive to Rosie.

It was also about then that a young Elizabeth Koehler began paying visits to Rosie.
In this insightful and poignant memoir, based in part on Sister Paulus’ private notes and augmented by nearly one-hundred never-before-seen photos, Elizabeth Koehler-Pentacoff recalls the many happy and memorable times spent with the “missing Kennedy.”

Based on independent research and interviews with the Shriver family, she tries to come to grips with Joseph Kennedy’s well-intended decision to submit her eldest daughter to a still experimental medical procedure, and his later decision to keep Rosie almost entirely out of public view.

She looks at the many parallels between Rosie’s post-operative life, her own, and those of the two families.

And, most important, she traces how, entirely because of Rosie, the Kennedy and Shriver families embarked on an exceedingly consequential campaign advancing the cause of the developmentally disabled, a campaign that continues to this day.

Ten years after Rosie’s death comes a highly personal yet fitting testimonial to a sad but truly meaningful and important life.

Advance Praise for The Missing Kennedy

“Aunt Rosemary inspired so many to work against injustice and ignorance. Her struggle and her immense legacy will be felt and celebrated by reading this exceptional book.”
BOBBY SHRIVER

“Reveals an untold chapter in the Kennedy saga . . . Also shows how knowledge of Rosie’s disability led to the founding of the Special Olympics by Eunice Kennedy . . . Provides a few interesting glimpses into one member of the Kennedy clan who was almost lost to her family.”
KIRKUS REVIEWS

“The Missing Kennedy is a truly inspiring story. It captures my Aunt Rosie’s spirit so well. I especially love how it intertwines the stories about Rosie and the author’s Aunt Stella. And it provides some great glimpses into the author’s experiences with both of them.”
ANTHONY SHRIVER

“Poignantly discloses our nation’s shortcomings, both historically and contemporarily, when it comes to understanding the mentally ill and intellectually challenged. Also reveals the dearth of research concerning the women of the Kennedy family, which pales in comparison to the body of work focused on its men . . . This is especially true of Rosemary Kennedy, the eldest Kennedy sister, who was lobotomized and kept from her family and the public eye for over 20 years . . . It was the author’s aunt, Sister Paulus, who was Rosemary Kennedy’s caretaker at Saint Coletta, where Rosemary was kept for many years after her lobotomy only exacerbated her intellectual and emotional challenges . . . Koehler-Pentacoff’s book offers an intimate glance at the sheltered life that Rosemary lived while her glamorous family grew in prestige and power . . . Heads in the welcome direction of telling the largely untold story of Rosemary Kennedy, and the story of the intellectually challenged and their allies in the fight to place them as equal members of society.”
IRISH AMERICA

“Anyone in the world who’s interested in the famous Kennedy family will find this fascinating memoir to be essential reading. Rosemary Kennedy was the least known member of the family but, it turns out, one of the most significant in the big scheme of things. If you don’t read The Missing Kennedy, you won’t know a critical and enlightening part of the Kennedy story.”
DR. ABE BORTZ, AMERICAN HISTORIAN

One Reply to “The Missing Kennedy”